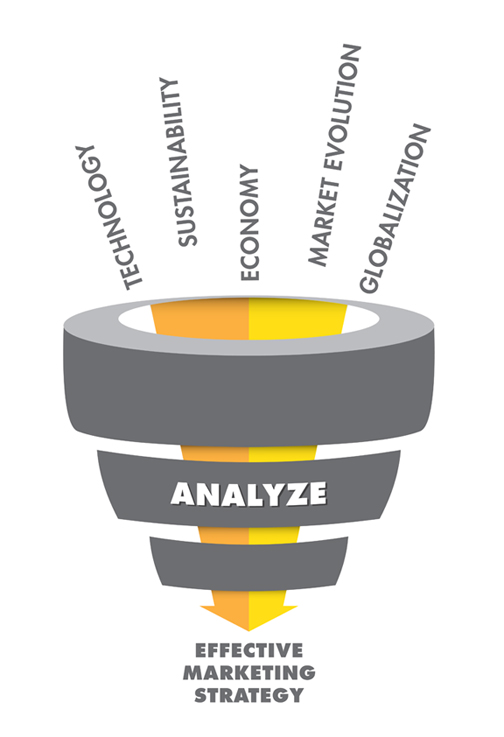 As a marketer, one has to be aware of market dynamics and how their fluidity affects how any target audience reacts to its movement.

The architectural market is no different. Over the last ten years, there have been a whole series of changes, both good and bad. The economy, technology and our desire to better the environment have all become key drivers in this change.

The economic downturn led to several things: firm downsizing and even the elimination of some architectural firms. Along with the overall downsizing, came the need to combine the function of spec writing (the writing of specifications by an architect set down by the American Institute of Architects) under the prevue of the architect and not a designated spec writer. Libraries, a physical location within an architect’s office, where all construction product’s literature and samples are kept for reference and project inclusion, were all but eliminated. Firms were forced to become leaner and nimbler to compete in an ever-growing competitive market. Less people means less time.

It is not the first time that technology has stepped up to fill the gap when functions were eliminated. On the brighter side, technology has streamlined the design process and revolutionized the way architects access information.

BIM is an example of where not only can the architect be confident with his part in the design process, but also technology can assist the design-build process as a whole. With the newness of technology comes a very fluid environment where hardware and software are constantly in a state of flux.

We as marketers need to be cognizant of new hardware devices, even when their involvement in the design process is yet to be fully realized. Although research indicates device acceptance in the architectural market, it is yet to demonstrate any common usage patterns. Acceptance of a particular device is not always an indicator of a defined application.

Research indicates an acceptance of mobile devices, but the same research also indicates that the work itself still tends to be done on a desktop. Obviously, that may change as the younger generation ages and become the decision-makers.

Globalization has benefitted the architectural community and has given architects the ability to ply their trade all over the world. Also, it has led to an awareness of an architect’s creativity, which has no boundaries. Firms are now global in nature as opposed to being only domestically driven.

Sustainability is another evolving issue to be considered. It began as a way to make us more aware of our over indulgence of the environment and has evolved into a more refined desire to make buildings more healthy and energy-efficient. Recycled content is now seen as a low priority and has been replaced by energy efficiency, healthy building, water efficiency and renewable energy.

A good marketer is one who analyzes and monitors this market evolution and acts appropriately to maximize marketing’s effectiveness.