Social media strategists are always looking for new, fresh ways of marketing to their audience in order to encourage better customer relationships and to establish strong brand loyalty. The world of social media is a dizzying, fast-paced maelstrom that requires quick, smart thinking in order to develop a solid social media marketing strategy that will thrive, but is it possible for strategists to find marketing success by relying heavily on popular culture?

Any person who has spent a considerable amount of time on the Internet has interacted with a meme in some way, shape, or form. Memes are a photo, text, or video that are virally shared across the Internet; an inside joke that almost everybody gets, but is it worthwhile to invest and strategize around an Internet meme that will rise and fade into oblivion faster than you can read this sentence? To answer this question, we must first establish some main points about memes that every marketer should be aware of.

1. Memes have a short lifespan.

Memes are essentially Internet fads. Rage Comics, Conversations imagined between Joe Biden and Barack Obama, Hotline Bling are all examples of memes that had taken the World Wide Web by storm and then disappeared just as quickly as they came. In November of 2016, if a brand decides to start a campaign that refers to The Dress (also known as the dress that nearly burned the Internet down in 2015), then the strategy would most likely be met with mockery.

2. Memes are supposed to be funny.

Most memes utilize satirical humor, so successfully referring to a meme really boils down to whether or not you’re funny, which can be difficult because some references can fly over someone’s head. And if someone completely missed the joke, either they never saw the meme or the set up truly wasn’t funny.

3. Don’t over think it. Memes are meant to be quick.

“It ain’t that deep.” Don’t be that guy who needs to explain the punchline. As before stated, memes are all “inside” jokes. They’re supposed to be quick, off-the-cuff ideas that will earn a few good laughs and some social shares.

There is nothing more embarrassing than a campaign that refers to a meme where it is not applicable. Even if it is just an Internet trend, as a marketer on social media, it is imperative that you know your memes and you know when to appropriately refer to a meme.

There are certain elements to a meme that make it recognizable; removing those core components takes the meme out of its original cultural context and will deem it ineffective.

Here are some examples of memejacking gone wrong and right. 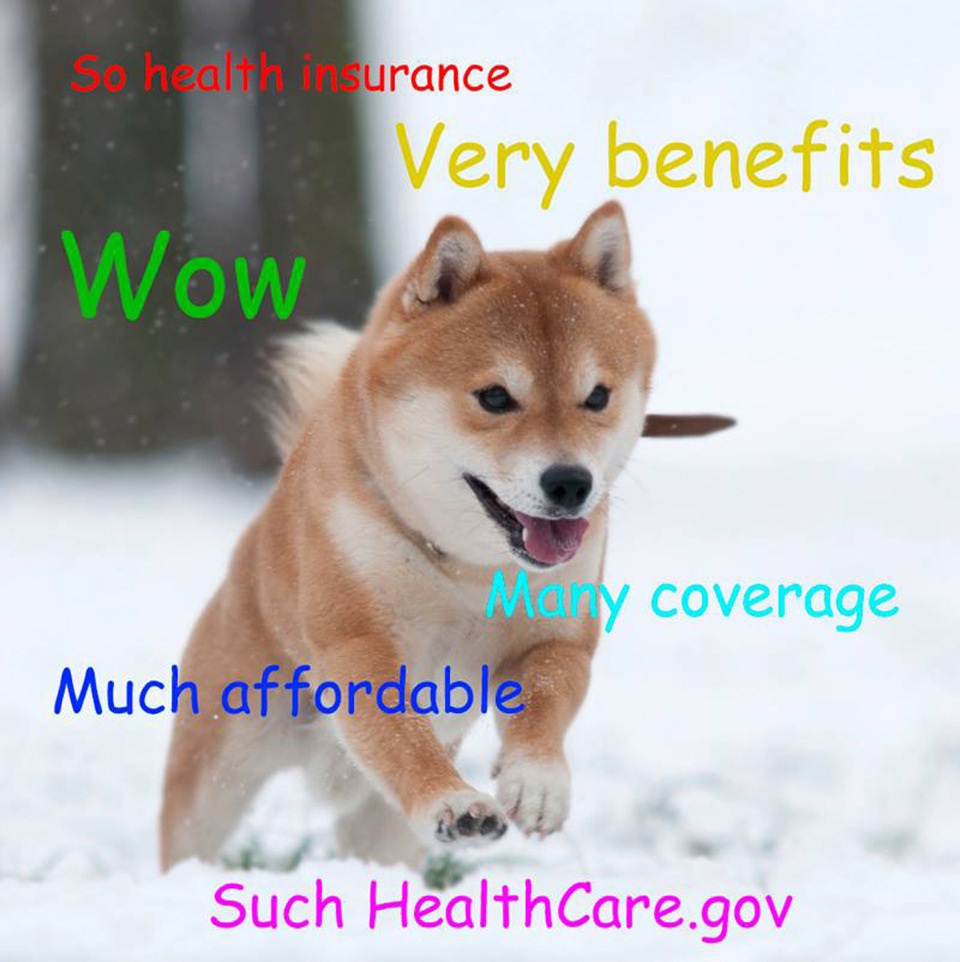 What went wrong? This advertisement, which tried to market Obamacare with the infamous doge meme, was used by the US Department of Health and Human Services. The doge meme is characterized by a photo of a Shiba Inu, whose internal thoughts, which are typically written in broken English, are placed over the image in brightly-colored Comic Sans font. The main problem with this strategy is that it is not at all funny, not even in a satirical sense.

What went right? This ad for Dreamworks’ “Puss In Boots” film was a spoof of Old Spice’s “The man your man could smell like,” which not only turned into a viral meme, but also changed the style and tone of Old Spice’s iconic ads. What went well with this example was that marketers took the key components of the original ad (a humorous, rapid-pace, nonsensical script that is shot in a dynamic single take) and placed it in the world of Dreamworks’ Shrek. 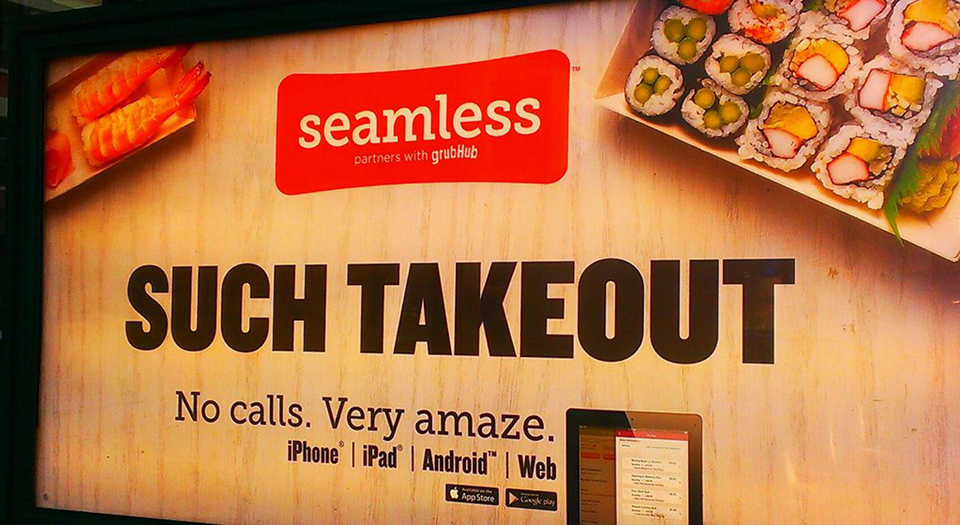 What went wrong? Using the doge meme for marketing purposes is tricky, and if you did not see that this was a reference to the doge meme, then it’s understandable. The first mistake that this campaign makes is that it took out one of the key components of the meme; a doge meme can’t be a doge meme without that dog(e.) In addition to that, there is no joke. The marketers are essentially using broken up English to advertise Asian takeout, which earns another round of collective groans because, out of context, the ad using broken English to sell Asian takeout can be taken in offense. 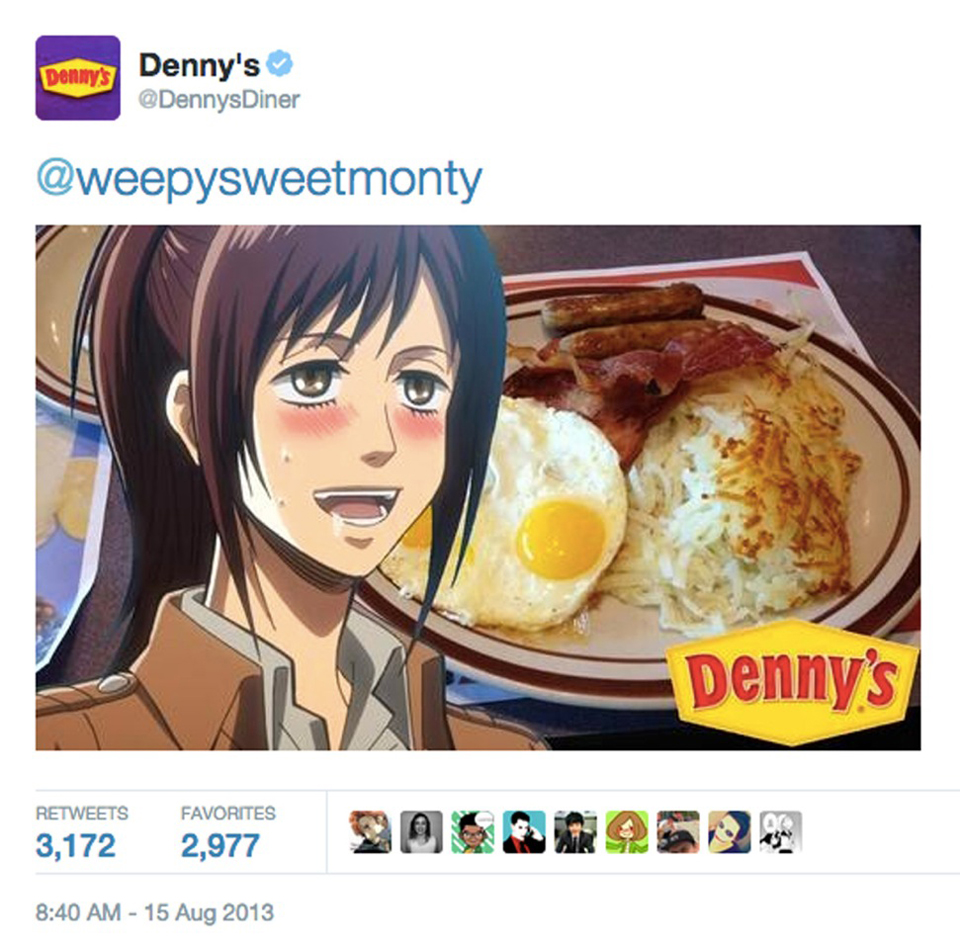 What went right? The meme in this image is known as “Potato Girl,” which is a reference to a scene from the popular anime and manga “Attack on Titan.” The scene features Potato Girl, who is a new military recruit, eating a potato when she was supposed to be standing at attention. When her superior officer catches her fiendishly devouring the potato, Potato Girl sheepishly offers her superior half of it. Such an obscure reference wouldn’t have worked with just anybody. Denny’s social media is centered on a series of nonsensical, heavily photoshopped images. Denny’s, especially on platforms like Tumblr and Twitter, is that one crazy aunt who can get away with saying whatever she wants because that’s her brand. It’s her role to not necessarily make sense. That is Denny’s image on social media. The image itself is quick, funny, and it doesn’t try hard to be “hip.”

Do memes belong in marketing?

Longer answer: Memes can help your brand or they can hurt your brand. Deciding whether or not a meme is good for your social media campaign ultimately depends on who your target audience is and what you’re trying to sell. Using a meme to sell health insurance is different than using a meme to sell a stack of pancakes, so if you’re a marketer trying to weigh in on whether or not memejacking is beneficial, you should be paying attention to whether or not your market and audience are the sort who would enjoy that kind of approach. Remember that awareness of Internet trends is meaningless if you can’t appropriately participate in these trends.