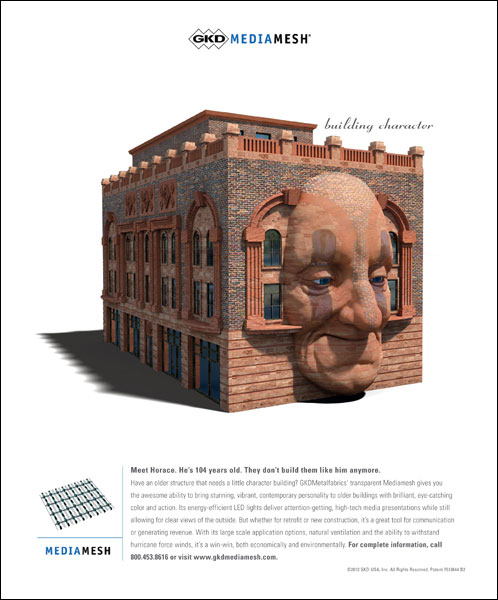 To give a quick description of the product, GKD MediaMesh is a combination of stainless steel wire mesh interwoven with LED lights that is attached to a buildings exterior. The surface of the Mediamesh can then be used as a high tech media presentation featuring live broadcast or just conceptual art as required. The advantages of this product are that it requires less electricity than conventional billboards and allows for natural daylighting and ventilation. 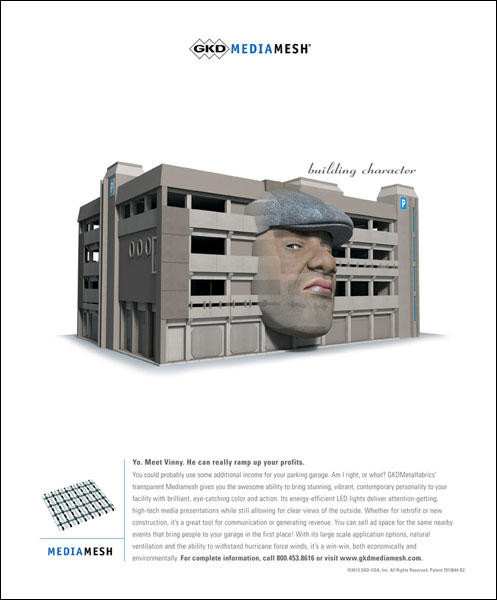 Our objective was to research and identify new applications and the building types associated with them. We wanted to convince the target audience that the adoption of Mediamesh would not detract from any daylighting or energy efficiencies they were trying to achieve with their design. In fact Mediamesh would add and complement any such overall green initiatives.

We were asked to relaunch Mediamesh and target it more generally to the architectural community and not just limit it to the single outdoor media focus.

Our research indicated that an architect/designer sees a building as having a personality and an identity. To build on this thought, we exaggerated the chosen persona of the building and actually brought it to life. Thus creating an individual building character. Obviously, we would have been somewhat constrained by only using print, so we chose also to integrate the campaign digitally with video and sound. The latter not only achieved our creative goal of bringing the building to life but also allowed us to communicate the features and benefits of Mediamesh in a humorous and memorable way. Visitors from either medium were taken to the Mediamesh website for more detailed product and technical information.

Response to the campaign has been significant, with print enquiry numbers well above the norm. Numbers so far indicate response levels triple the historic ad levels with the two key Architectural Publications. Also, GKD Management has seen a new mix of enquiries across all targeted market segments both Domestically and Internationally.

The MEA winners are chosen based upon the effectiveness of their marketing campaigns. According to the Summit International Awards (SIA), “the goal of marketing communications is to change, influence, or reinforce a target audience’s knowledge, attitudes or beliefs.” The competition uses this goal as one of the criteria for competitor judgment.

Additionally, the competitors are also judged upon the following criteria;

The highest recognitions are silver, platinum and best of category. These prestigious awards were given to less than 10% of this year’s entries.